The Splunk>VictorOps for Microsoft Teams Integration allows teams to work from MS Teams while leveraging the notification and coordination capabilities of VictorOps.

As a global administrator, navigate to Integrations >> API. Note the API key and API ID, which will be used in Configuration below.

In the Microsoft Teams App store (in the menu bar to the left, click the ellipses then More apps) find and select the Splunk VictorOps app. In the resulting modal, click Add to a team. Specify the team you wish to install the Splunk VictorOps app to then click the Set up a bot button. This will install the app to the specified team in your Microsoft Teams organization.

NOTE: The user installing the app must have organization admin privileges in MS Teams for this step.

NOTE: By selecting one channel in the team, the app installs to all channels in that team.

NOTE: Configuration is visible to any user but can only be completed by an organization administrator with a corresponding VictorOps account using the same email address. Member-level users who attempt to configure the app will immediately sees unauthorized message. Furthermore, the Microsoft Teams user account used to complete configuration must have a corresponding user in VictorOps with an equivalent email address.

An introductory message with a Configure option will display in the team you installed the app to in the Installation section above:

As an organization administrator with an email address that corresponds to a VictorOps global adminstrator, select Configure. One the resulting page, insert the API key and API ID obtained from VictorOps. Click the checkbox to Allow application to access MS Teams account details. In the resulting modal, select your organization administrator account and follow the prompts to grant the applicable permissions. After consent has been provided, click Save. 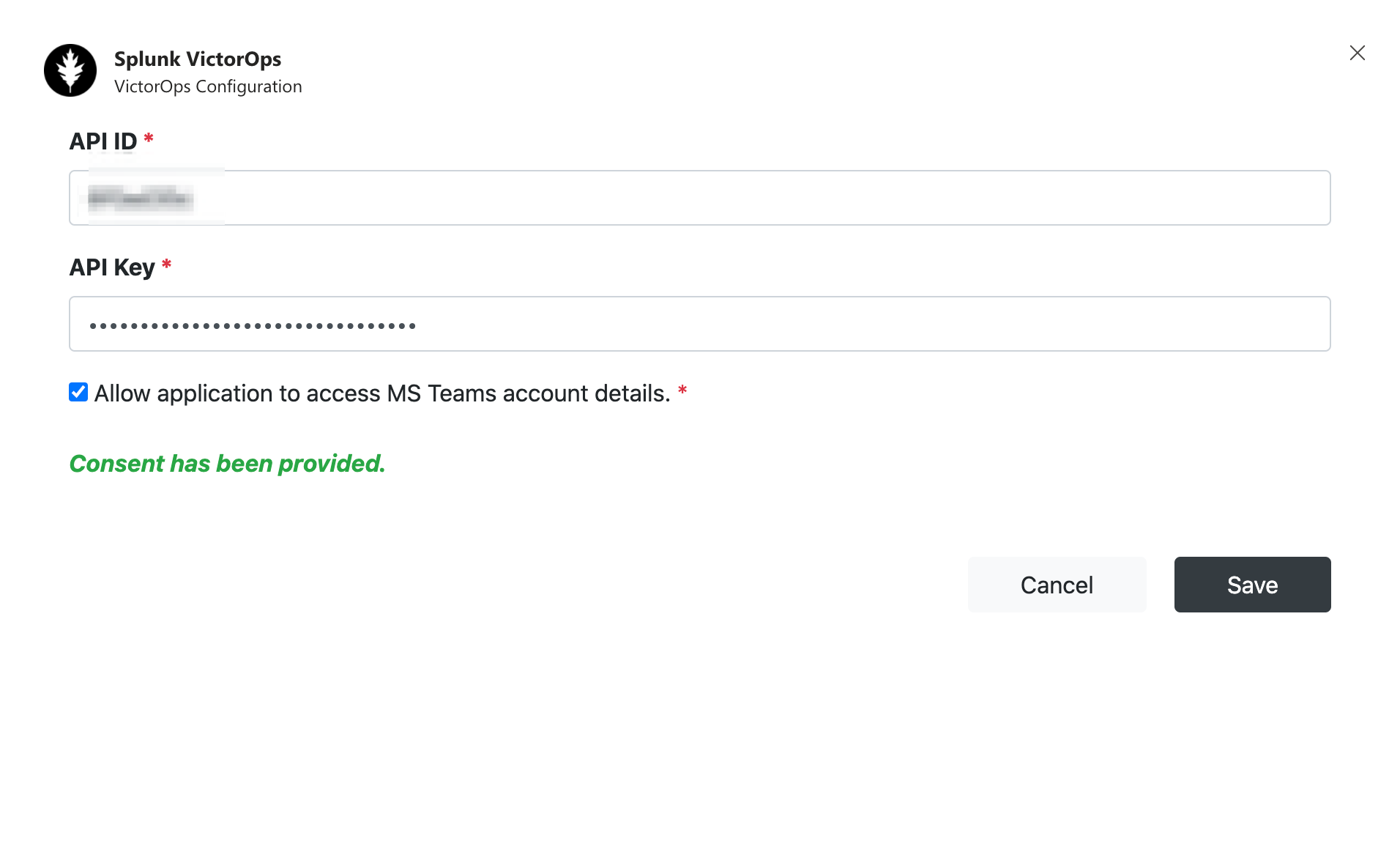 After adding, installing, and configuring the app, you will need to subscribe each channel to receive traffic from VictorOps.

NOTE: Subscribing a channel to VictorOps will subscribe that channel to all incidents from the VictorOps organization. It is a current limitation of the integration

Subscribing a Channel to VictorOps Incidents

To subscribe a channel, as an organization administrator execute the following command:

This will subscribe the channel to all incidents in VictorOps.

Unsubscribing a Channel to VictorOps Incidents

To unsubscribe a channel, as an organization administrator execute the following command:

This will unsubscribe the channel from all incidents in VictorOps.

NOTE: Subscribing/unsubscribing one channel does NOT affect the subscriptions of any other channels in the team.

How the App Works

VictorOps will route incident to the appropriate channels based on the mapping established in the subscription step above. After subscribing, users may acknowledge and resolve incidents in MS Teams.

The application handles both single- and multi-responder incidents.

Unsubscribing at the channel level does not remove the bot, and doesn’t impact other channels for that (or any other) team.

Deleting the app from the team level automatically unsubscribes all channels from that team, without affecting other teams’ subscriptions.

NOTE: Deleting from the org level does NOT unsubscribe currently due to a limitation in Teams. We’re currently working on figuring out a workaround.

Was this article helpful?